I felt there were great principles to be maintained, a holy cause to be defended, and determined upon my course - R.E.Lee April 8, 1865

Lee Jackson Day Official T-Shirts coming soon...!
Get your pre-order in today. Our 2023 Shirts will be Long-sleeve in Black. $30/ea. size S-XL. $33/each size 2X-3X.  (Larger sizes contact us for pricing). They can be picked up in person during the event, or shipped. If having mailed, shipping will be $10 for orders up to 2 shirts.
We accept payment by Credit Cards, Paypal, or by check or money order.
(Below was our 2022 shirt, 2023 picture coming soon!) 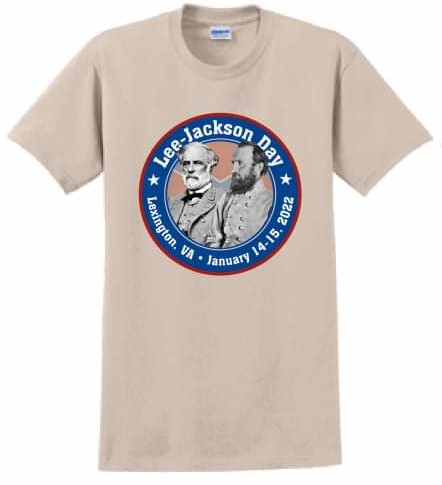 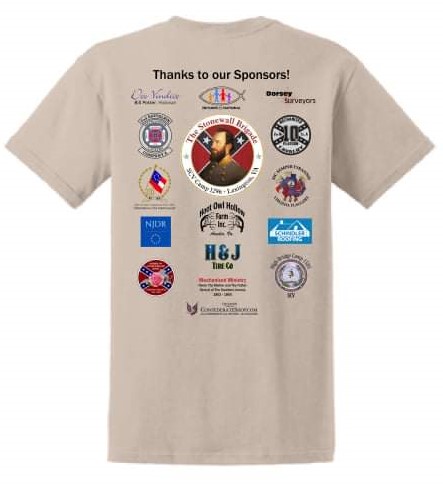 Payment can be made via Paypal @:    TheStonewallBrigade1296@gmail.com by logging into your PayPal Account and hit the Send button and enter the email address above.  Please fill in the Note section telling us that your ordering a shirt and what sizes.
If paying by check:
The Stonewall Brigade
PO Box 466
Lexington, VA 24450
If you have any questions, or if placing an order for lots of shirts (more than 2), send us an email, TheStonewallBrigade1296@gmail.com, & we'll make arrangements to deliver them or mail them more affordably.
Arrangements can also be made in person, with any member of The Stonewall Brigade. Thanks for y'alls continued support, We look forward to seeing everybody at Lee Jackson Day this year...!!
Deo Vindice

This is one of the best videos from television to describe the greatness of Robert E. Lee and his faith we have seen:  https://www.youtube.com/watch?v=L7ddPOnhmj0

Lee-Jackson Day is a celebration of the lives of two great heroes and most noteworthy citizens of Lexington, Virginia.  Robert E. Lee and Thomas J. 'Stonewall' Jackson were both born near this date which became a longstanding state holiday across the South.  While neither man was born here, both spent the final years of their lives as residents of Lexington.  Stonewall Jackson arrived here prior to the War Between the States and became an integral part of the community as a church leader and professor at the Virginia Military Institute.  Robert E. Lee arrived in Lexington following the war and rescued a destitute college that was later renamed Washington and Lee in his honor.  Both men are buried here which makes the town a fitting venue to commemorate their lives.  We welcome you to join us as we honor not only their military genius, but their personal lives, faith, and character.  We also encourage you to walk the streets and explore the town upon which both men left their permanent mark and legacy.

The Stonewall Brigade continues to hold up Lee and Jackson as examples of a life well lived and devoted to Duty and Truth over selfish desires or ambition as they had been viewed nearly universally until this most recent generation. This era has experienced the interjection of a loud and demanding segment which is unable or unwilling to separate historical truth from rhetoric and propaganda and has sought to besmirch their character based upon lies, half-truths, and innuendo. We continue to honor these men not out of any sense of anger or resentment against our detractors, though their misinformation and actions do harm our efforts and bewilder us. We honor Lee and Jackson because we love our family and our ancestors who fought so bravely under these two men who represent the noblest of sacrifice for one's community. They lost their fortunes and one his life in the struggle, but have secured a permanent place in history regardless of the lens through which any individual or generation tries to peer at them through.

Neither Robert E. Lee nor Thomas J. Jackson were advocates for slavery and in fact the Lee family had worked towards emancipation and bringing an end to the practice in Virginia.  Today the adherents of the new one universal man doctrine guided by the religion of Humanism and shifting morals of Relativism would simplify history and taint it in order to destroy it in an effort to recreate the world as they see fit.  This approach is based upon complete disregard for the Truth and borrows its justification from the worst of ideologies of murderous dictators and the doctrines of demons.  Both men believed in the universal equality of humanity before God and their Lord, Jesus Christ, to whom was owed respect, duty, and responsible living as a testament to the one Truth.

Washington & Lee's administration now considers honoring Robert E. Lee in Lee Chapel on Lee-Jackson Day to be an improper use of a building built under the administration of Robert E. Lee which is also his gravesite and the home of the Lee Memorial.  As Donald Trump recently said, Political Correctness has ruined our country.  Robert E. Lee, while a humble man who would not want such a fuss about himself whether he deserves it or not, would no doubt be ashamed of the university's rejection of nearly all traditional values and its succumbing to marxist mob rule.  R.E. Lee envisioned the building's use as a place to promote non-denominational Christianity and once stated his greatest wish in life would be to know all the young men [and now women] who graduated there would become good Christians.  Sadly, just as the rest of the West decays into the moral abyss, so to does this once great institution.  Sexual perversion is celebrated while great men like Lee and Jackson are treated as heretics.  So great has the degradation become that even the military portraits of Lee and George Washington in the Chapel have been removed.  This is the tyranny of emotion, the situation where godless humanists have turned a place of learning into an experiment of lowering oneself to the bases of animal desires.  Instead of looking to Lee as the marble man of duty and honor, the faculty and student body increasing reviles his legacy as an impediment on their way to their unrestrained utopia.  Satanism now reigns with its "Do as Thou Wilt" rather than Lee's "You should do your duty in all things.  You can never do more.  You should never wish to do less."

For More History on the building of the Lee Memorial at Lee Chapel visit:

For a MAP of the event locations please Click Here

Historic Lexington ~ Shrine of the South